For the Right To Peace: DARN and Partner join the World to Mark Peace Day 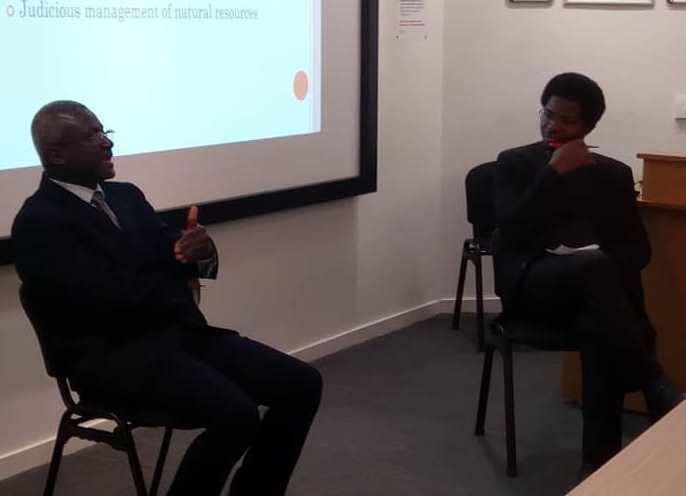 2018 INTERNATIONAL DAY OF PEACE TALK
In the evening of 20th September 2018 inside the Large Lecture Theatre of Dalhousie Building of the University of Dundee, Dundee Africa Research Network (DARN) and the Centre for Global Culture and Public Diplomacy jointly organised a talk to mark 2018 International Day of Peace which is officially celebrated on 21st September of the Year. The talk was organised a day before to allow our members to fully participate in various online activities across the world on 21st September. It was a huge success. We were pleased to make a local contribution to the global advocacy for peace which coincided with the 70th anniversary of the Universal Declaration of Human Rights. We use this opportunity to thank everyone who attended the event.
The event commenced, shortly after the general introduction, with the video message (http://www.un.org/en/events/peaceday/) of His Excellency, Antonio Guterres, the Secretary-General of the United Nations on the Peace Day and followed by a special talk which reflected on the lessons drawn from the peaceful transition of power following the 2017 Presidential Election in the Gambia. Our Guest speaker was Dr Alhagi Drammeh, Associate Professor of Islamic Studies at the Al-Maktoum College of Higher Education, Scotland. Dr Drammeh spoke on Democracy and Security in the Post Yahya Jammeh Governance in the Gambia. He gave an overview of the Gambia’s political history and explained how Yahya Jammeh came into power in 1994 through a successful coup on the pretext to work for the Gambian masses. According to the speaker, it was unfortunate that Yahya Jammeh changed when he tasted power. He was able to sustain his grip to power for more than two decades as an authoritarian ruler in the small state of West Africa with various human rights abuses. The 2017 Gambian presidential election was seen as a testimony to the frustration of the Gambian masses against Jammeh’s authoritarian posture. In the face of creating imminent political chaos that would have led to a humanitarian crisis in the West African sub-region, the Gambian people, with the regional and international support, remained resolute and ensured that Yahya Jammeh handed over power to the winner of the election, His Excellency, Adama Barrow. The speaker was more positive about the new administration, believing that President Adama Barrow has been working to turn the Gambia around by developing new partnerships with local, regional and international actors in reforming the governance institutions of the country in order to serve the needs of the people. Even though, it may be too early to judge the performance of the new political leadership in the Gambia, the notable message about the talk was the peaceful transition borne out of concerted efforts of multiple actors from the popular will of the citizens, the consistent advocacy of civil society, the role of ECOWAS Mission in the Gambia (ECOMIG), the Support of the European Union and other international actors who were involved throughout the transition period.

Dr Drammeh, a Gambian intellectual in the diaspora, was able to share with us his perspective on the new political dispensations in the Gambia as that of a positive reformation while also acknowledging some of the challenges before the government. One of them, according to the speaker is the divergent interest of the political party coalition currently in power. He also acknowledged the discovery of crude oil in the Gambia as an economic opportunity in addition to the country’s tourist industry among others. As the new government of Gambia seeks to build robust relations with the world to better the lots of the Gambian citizens, it is our hope that the rights to peace and human security of all Gambian citizens would remain a key priority of Adama Barrow-led government in the New Gambia.

We express our appreciation to the University of Dundee’ s Equality and Diversity Unit and the Institute for Social Sciences Research (ISSR) for providing the necessary support for the success of this laudable event. 2018 International Day of Peace Talk was jointly organised by the Centre for Global Culture and Public Diplomacy and Dundee Africa Research Network (DARN).
The Centre for Global Culture and Public Diplomacy is a new initiative for awareness creation on regional and global development programmes such as the African Union’s Agenda 2063 and the United Nations’ Sustainable Development Goals (SDGs).