Re: The Path to Sustainable Development in Africa

Corruption (Again) and Planning
The last talk (The Path to Sustainable Development) on 27 October 2016 was a huge success. Members of the convening team are deeply grateful to all attendees. They included students and staff of the University of Dundee, but also students from the University of St Andrews and Abertay University who made various insightful comments. 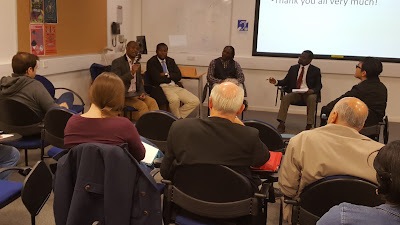 Vincent Onyango, Edwin Ezeokafor and Theophilus Dapel made their individual presentations, as previously advertised. The universality of corruption was a dominant view from the audience. While corruption was roundly condemned, a strong case was made for African countries to develop despite various corrupt practices. Nevertheless, weak institutions and a lack of robust regulatory regimes were highlighted as significant challenges. Such challenges are sometimes compounded by foreign investors who are overly focused on making profits and exploit the weaknesses of their host countries. As such, it was also argued that African countries need to relate with other countries on an equal partnership basis. It remains open to debate, however, how much equality can be achieved where some African economies are run almost entirely on finite natural resources. The global oil price collapse is illustrative of the need to implement comprehensive national economic plans, including the diversification of revenues. In appropriate contexts, “African solutions to African problems” would have its appeal. However, a word of caution from Vincent Onyango: there is no African way of fixing a car.

See more photos of the event via this link: https://goo.gl/photos/xYDVFRtfMLz4F21A8 .