On the 27thof November DARN hosted a session around the title “What’s holding Africa back?” with a particular focus on renewable energy. Discussing this question were Andrew Symms and Adelani Ayoola from DWF, a global legal business. Given the focus of the talk, many students and staff from the Centre for Energy, Petroleum and Mineral Law and Policy at the University of Dundee attended. 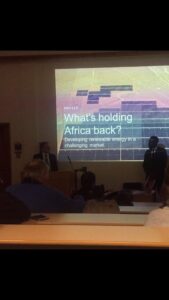 Mr. Symms argued that many of its clients increasingly saw opportunities to expand their operations to Africa due to its abundant natural resources, the enormous demand for energy and potential for growth, especially when looking at smaller hydropower projects.

Of course, they identified challenges as well. The political and legal environment sometimes causes their client concern, but the speakers noted that stability in countries is increasing, as is the perception that contracts can be enforced. Mr. Ayoola noted however that this is something companies need to take into account when preparing their timelines, as it can sometimes take longer than expected to complete projects. Another challenge revolved around logistics, such as getting the energy from where it is produced to where it is needed or getting the equipment on site. The importance of getting cooperation from local stakeholders was also discussed alongside with the need for companies to take their corporate social responsibility serious, an issue that was further commented on during the Q&A session following the presentation. 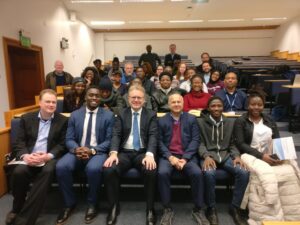 Another topic that was brought up related to public-private partnerships which about getting private finance into a project that otherwise an authority such as a government would not be able to finance because the risks are too great. The influx of (foreign) private capital however also leads to a situation where contracts often stipulate that arbitration takes place outside the local law. Typically, it is agreed that arbitration of disputes will be done according to some western law system, frequently in Paris or London. 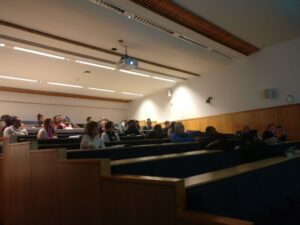 For more background information, please download the DFW report that prompted this #DARNTALK here. DARN kindly thanks DWF and the CEPMLP for their support in making this event possible.